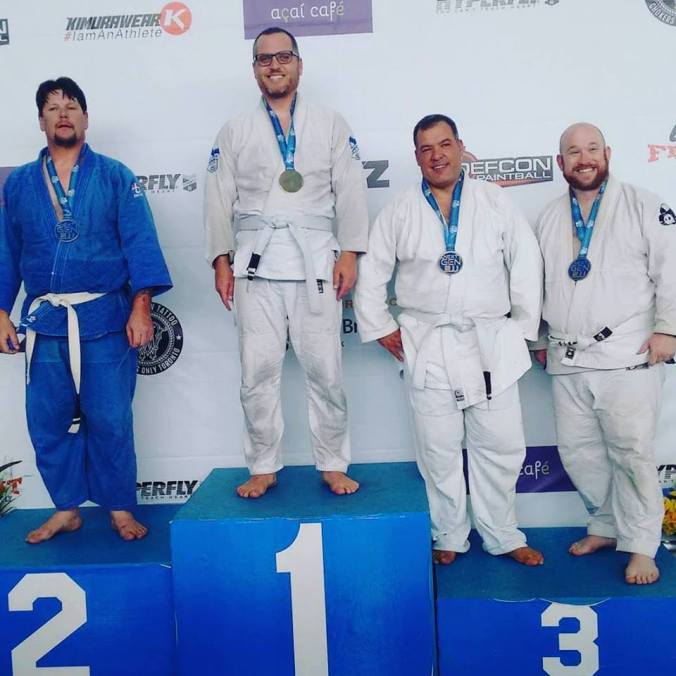 That’s me on the end. (Photo courtesy David Holman, who won gold.)

Over the course of this blog, there will be a lot of talk about how bad I am at Brazilian jiu-jitsu. This is for two reasons:

That said, I have had some limited success in this. This is a post about one of those successes.

Back in July, I fought in my first ever tournament. I was terrified to compete. I’m not competitive by nature. It’s one of the many ways in which BJJ is a weird choice of hobby for me. (I’m also claustrophobic. More on that later.)

Much to my surprise, I came in third in my weight class.

Here are three things I learned from coming in third:

One of the core principles of Brazilian jiu-jitsu is that a smaller person can beat a bigger person using technique and leverage. (Hélio Gracie was a tiny, tiny dude.) Being that I’m 225 lbs., I’m almost never the smaller person in a fight. The exception being in tournaments, where I end up being the smallest guy in the heaviest weight class.

That means I wind up having to fight men the size of literal, actual bears. There is no ceiling in the largest weight class. The first man I fought was enormous, well over six feet tall and probably very close to 300 lbs. And I beat him. Using leverage and technique. BJJ really does work. Thanks Hélio.

Adrenaline management is everything

In my fight against the aforementioned bear man, he came at me with, well, bear-like ferocity. He pulled guard hard, squeezed me until I thought I would pop, and tugged at my arm like it had personally affronted him. But unfortunately for him, I managed to escape those armbar attempts, and after the third or fourth one, I watched him realize there was still two-and-a-half minutes of fight left. He looked deflated. I actually saw his expression change. He’d spent all his energy.

I am not good at BJJ. I have two techniques that work for me semi-reliably against people at my own level. I get mounted with an alarming frequency. I’m very susceptible to triangles. But I know myself pretty well. I kept calm under attack, and when he had burned himself out, I was able to capitalize.

For my second fight, I fought someone from my own gym. Someone who is both a better natural athlete than me, and seems to have a brain that picks up techniques in a way mine doesn’t. Someone who constantly kicks my ass in training.

I would love to say that on tournament day, things went differently. They did not. It went sweep-mount-armbar. Just like it did when we fought at the gym.
But you know what? I didn’t care. I felt great. I got out, I competed, I beat someone, and then I learned I need to work on my mount escapes. I felt like a winner. Even if I came in third.