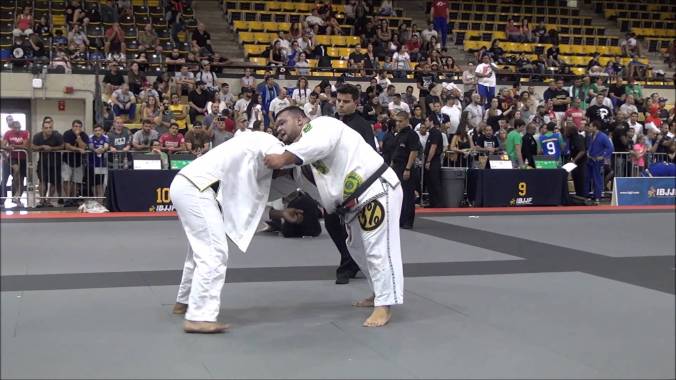 That is neither me nor Luis. That’s BJJ pro Otavio Nalati, an inspiration to big BJJ players everywhere. (YouTube Screenshot)

Every time I get the chance to train with another big guy — someone who competes at ultra heavyweight and, like me, has a bit of a gut on them — I get a little giddy. It’s just great to work with someone who paints with the same palate as I do. I don’t have to feel self-conscious about my bulk, or my inability to pull of certain moves. (Berimbolo classes are every big jiujiteiros nightmare.)

It’s also nice to see how I stack up against the sort of guy I will be eventually be competing against. Am I too dependant on using my strength and size to smash smaller opponents, or is my technique good enough that I can hold my own against another big guy? If my fellow ultra heavy is a higher belt, so much the better. Sure, they’re going to grind me into a fine powder, but they’re also going to show me a few cool pressure-based big man BJJ tricks along the way.

On Monday night, I had one of these glorious experiences. My partner was a purple belt named Luis, who has a crushing side control and a relentlessly positive attitude.

(For the uninitiated, side control day is pretty much every big BJJ player’s favourite day.)

We had a blast. We cheered each other on, tried to give each other tips through a language barrier, and when it was time to actually test what we’d learned against each other, we really went for it. I didn’t question whether or not I was just using my size rather than my technique. And for sure, Luis got the better of me, but I held my own better than I expected to.

Here’s the emotional honesty bit; I had a concussion a few months ago and have kind of struggled to get back into training. BJJ is hard and it’s supposed to be. It’s a hobby that’s not always going to be fun. Sometimes it’s going to be frustrating. Sometimes it’s going to make you question what you’re doing with your life. It’s always going to push you, physically and emotionally, further than you thought you could go. But then there are days where everything makes sense, where the techniques start to click, and you just feel tremendous joy. Those days are the payoff that make the other, harder days worthwhile. I hadn’t had one of those good days in a long time. In the month-and-change since I’d been back, everything had been hard. Everything had been pushing a rock up a hill. This was compounded by the fact that I was promoted to blue belt while I was out, which means that when I came back, I was coming back to new, harder classes that would have gone over my head even when I was healthy.

I needed a good day to remind me why I do this. So thanks Luis.