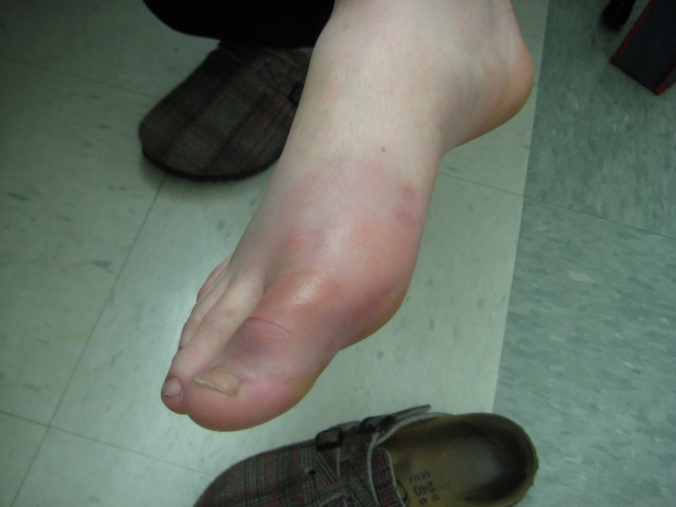 Not my toe, but not unlike what my toe looked like last week. (Tony/Flickr/CC)

When I started this blog a few months ago, I was struggling to return to BJJ after being injured. Now, I’m working on re-imagining it, turning it from a night school project into a thing I’m just doing as part of my life and training. And as per the circle of life, I’m injured again.

Now, it’s not nearly as bad as last time. Last time I had a head injury, which are scary and can be disorienting and leave you messed up for weeks. This time I have a broken toe, which is mostly just a pain in my ass.

(An aside, do you know that for a broken toe all they can do is tape it to another toe? It’s called “buddy taping.” Because your toe has a friend that makes things less painful. How emotionally resonant is that?)

Anyway, every time I get injured, people question why I do Brazilian jiu-jitsu. This is sort of a subset of the response I get to telling people I do BJJ in general, which is “Why would a seemingly sane man in his 30s who is, to put it diplomatically, clearly not a natural athlete, take up a sport where you fight people?” People think I’m trying to prove something, or have some sort of issue I’m trying to work through. And for sure, they aren’t totally wrong. There are a lot of psychological issues that I’m working through that BJJ helps me with: my anxiety, my depression, the sense of helplessness that comes with those things, my feelings of not being “enough.”

But those are all side benefits I discovered after I started training. Mostly I’m just trying to get some exercise.

“But why this exercise? Why couldn’t you do something more reasonable, like running?”

And this is where I start to get annoyed. Because I have some people I love dearly who are runners, and I would never shit on someone else’s preferred form of exercise, but the idea that running is somehow a saner, more reasonable workout than jiu-jitsu is garbage.

Runners are prone to everything from plantar fasciitis to torn glutes. (No, that really happened to a friend of mine mid-marathon. That’s real.) They damage their knees and hips and ankles and then claim that those stupid toe shoes will fix things. Runners have a bizzarro culture in which pain is just a thing you “push through,” and finish your marathon, torn glute and all. The only reason running is considered “reasonable” exercise” is that a) it’s of our culture, so people are used to it and b) it doesn’t LOOK as unsettling as people grappling. (I’m not saying that North Americans invented running, that’s stupid. I’m just saying it’s thoroughly integrated into our culture.) In reality, slamming your feet down on concrete for dozens of kilometres a week is no more or less reasonable than rolling around with your friend trying to catch an armbar.

All exercise has a risk of injury attached to it. Running, BJJ, skiing, yoga, “the gym,” all of them have risks. So does crossing the street. But the greater risk comes from not exercising at all. Exercise is good for you. It makes your life better. And occasionally being banged up is a totally reasonable price of admission for the overall benefits.

(And I want to head this off at the pass, I’m not talking about weight here. I’m talking about metabolic and mental health. There’s not a one-to-one relationship between metabolic health and weight. Also, one of the best BJJ players at my gym has a gut not unlike mine, but is fast and strong and technical as balls, and could for sure armbar every fitness guru out there. Corey, if you’re reading this, you’re my hero, guy.)

Injuries happen, but finding the activity that keeps you healthy and sane is priceless, even if none of your friends understand it.