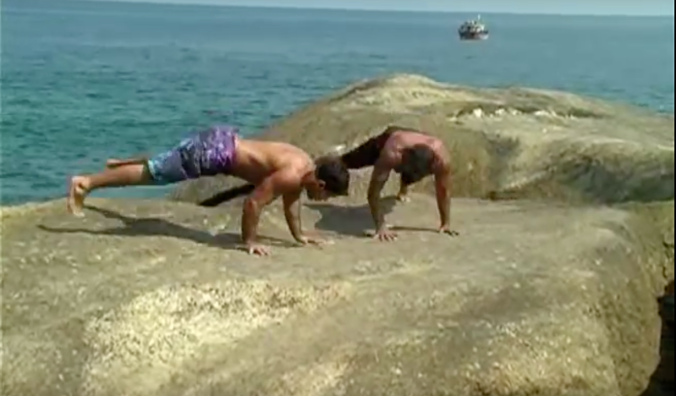 Alvaro and Raphael Romano doing some Ginastica on the beach in Rio. (Screenshot/YouTube)

Every so often, I go to train BJJ, and either because I really want to push myself more than usual—or, more likely, because I’ve forgotten what day it is—I wind up training Ginastica Natural instead.

So, what’s Ginastica Natural? Great question. The easiest answer is that it’s like what would happen if Brazilian Jiu-Jitsu and yoga had a baby, and that baby was a bit bonkers. It takes a lot of the jiu-jitsu movements, and works them into sort of a yoga-like series of poses, with a yoga-like focus on breathing. For me, it’s like yoga in that I’m usually losing my balance and two moves behind everyone else, and like BJJ in that I’m almost immediately very tired and medium confused. It also takes a lot of the things I’m good at in BJJ—physical strength and a good ability to read people—and throws them right out the window.

The first time I trained Ginastica Natural, I kind of hated it. I spent most of the flopping around like a fish on land, hoping it would all be over soon. After I got over the initial burning embarrassment, though, I realized it could be a really helpful tool in my quest to get better at jiu-jitsu. It highlighted some real weak spots—flexibility, mobility, breathing—and gave me a tool to help fix that. And so over time, I’ve grown to have a respect and understanding of Ginastica. Do I like it? No, not really. Do I understand why it’s important if I want to get better at BJJ? For sure.

But also, maybe it’s growing on me.

Last Friday, I went to a class that was a mix of Ginastica and BJJ. A quick warm-up, about 40 minutes of BJJ, and two rolls. And it felt amazing. The Ginastica was just short enough that I didn’t start to think “please let this be over soon,” and the rolls were amazing. I was aware of my body, I was calm and focused and present, and my breathing was great. I was fully Ginasticaed while doing BJJ. I think that’s how this is supposed to work?

2 thoughts on “Training Diary: We Need to Talk About Ginastica Natural”