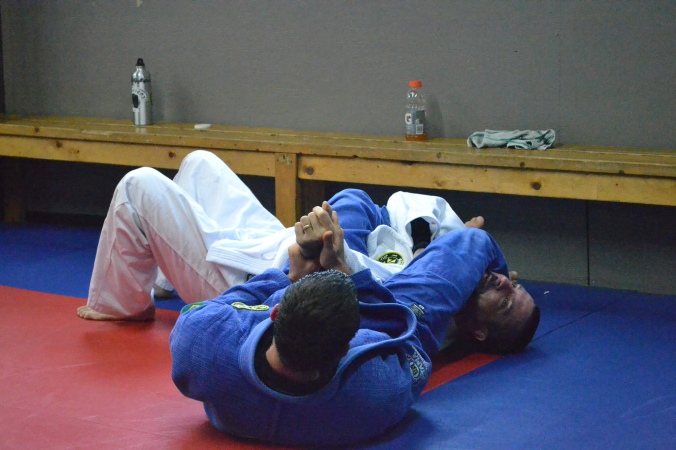 After I presented my blog in class a couple weeks ago, someone asked me “If jiu-jitsu is so hard all the time, why do you keep doing it?”

That’s a great question. I think everyone who does Brazilian jiu-jitsu asks that question from time to time. Or possibly all the time.

The answer I gave them was that sometimes everything clicks, and you actually manage to pull off something you’ve been struggling with in a roll, and it all feels worth it.

Last week, I was rolling, and I had one of these moments.

Armbar from closed guard is a pretty 101 BJJ move that most people manage to do in their first two or three months in the sport. For me, though, armbars from guard have been a pretty illusive. I have short legs, and a hard time moving around on the ground, and a total lack of confidence in my ability to keep my opponent where I want them.

Nonetheless, one of the things I’m working on is getting more comfortable with is fighting off my back, so I’m trying to pull guard pretty much every roll lately. I hate it. I’m getting crushed all the time. So I’m rolling and I’m pulling guard, and my opponent is in my closed guard, and his hands are really far up on me. Like recklessly far. So I move my body to one side. And he keeps his hands there. And then I give up the closed guard and I put my foot on his shoulder, because I can’t quite get my foot over his head in one movement, and now I’m expecting him to pull back. But he doesn’t. So I keep going, and next thing you know, bingo. I have the armbar on him, he’s tapping, and victory is mine.

Here are a couple quick takeaways from my great success:

1) Don’t be so conservative

I tend to play a pretty cautious brand of jiu-jitsu, and probably I should be a little more daring. Because you never know, you just might get it, and if not, you’ll force your opponent to defend and open something else up.

I have drilled armbar from guard into the ground. It has been awkward and uncomfortable and annoying. But muscle memory is a thing, and after a while it will actually kick in.